The last Parish Council meeting discussed the recent vast increase in aeroplane noise over the Parish from Stansted departures.

This is due to the change in flight path usage, introduced in February.  Stansted moved flights, which previously took off to the west and south of the Parish, directly over Felsted.   This has already more than doubled the planes passing directly over us. 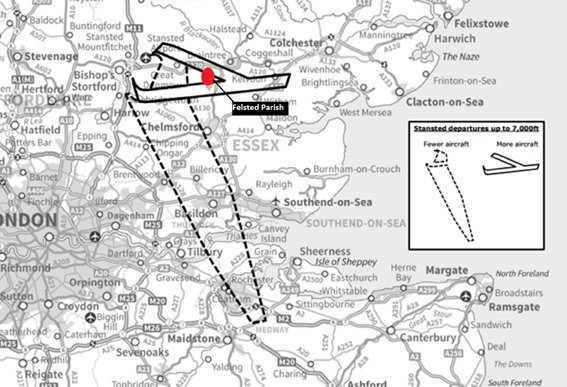 The above diagram is from NATS.  As can be seen, before February 2016, the flights spread over a wide area (marked by dotted lines), were moved onto 2 narrow corridors over our Parish (the red blob).  As flights have to take off into the wind (before turning to head onto the air traffic control route to Clacton), different areas of the Parish are affected differentially, according to the wind direction at any time.

Cllr Andy Bennett led the Council’s strong objection to this plan, and some residents also contributed individually to the 2014 NATS consultation.  Information about this is here and here.

When Stansted’s summer timetables start in the next few weeks, there will be even more planes overhead.  The airport is expanding fast, and is only running at approximately 50% of current capacity.  In addition, more runways at Stansted are again being promoted (4 RUNWAY HUB).

There could soon be many times the current number of planes flying directly over us.  This will be near-constant loud aircraft noise over our quiet rural area.

The Council continues to make strong representation to Stansted airport and via other official channels.  Cllr Andy Bennett and Cllr Richard Freeman met with senior management from Stansted, and their owners the Manchester Airport Group, in April about the unacceptable new situation.

But, there is no substitute for individuals making their own voices heard.

It needs a spread of individuals complaining NOW to stand the best chance of alterations being made to this new operation.  Individuals’ complaints at flightpath changes around other airports (especially Gatwick) have led to official re-thinking to mitigate noise nuisances being concentrated into single areas.

The process of complaining to Stansted is simple.

It takes just a couple of minutes to complete the form. This can be used to complain about specific noisy planes (where you need to give the date and time of the disturbance), or about the broader noise problem.

Using the form via the Stop Stansted Expansion group’s website, here, allows your complaint to be noted, then passed to the Stansted Airport noise complaint  team.

You can also complain directly to the airport here.