The Uttlesford Community Safety Partnership will be bringing the Op Sceptre knife amnesty bin to Felsted at the Memorial Hall between 12.30-13.30pm on 30th March.

The Partnership is providing a knife bin where all bladed items that people do not want or should not have can be disposed of safely and without fear of prosecution.

This is also an opportunity to raise awareness of new legislation which makes it illegal to possess certain weapons in private places, such as homes. This includes items such as knuckledusters, flick knives and telescopic truncheons. 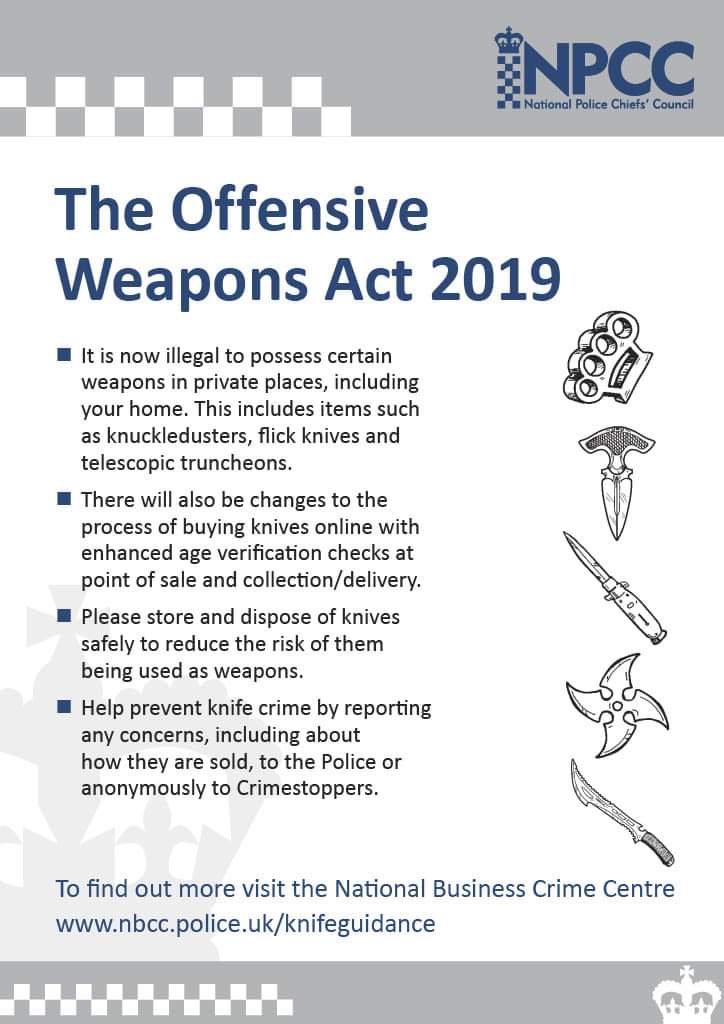 Update: we are pleased to confirm that the gate has now been temporarily fixed to allow access to the car park.

We received news on Christmas Day that the gate to the car park at the top of Jolly Boys Lane North had been vandalised.

Barney, our village attendant, visited the site on Christmas Day morning to make the gate safe. It had been smashed open resulting in considerable damage. It was no longer possible to fix the gate either open or closed in the usual way. Barney has therefore tied it closed in order to secure it safely.

The result is that the car park cannot currently be accessed. Fencing companies are closed until the New Year so nothing further can be done until then. We apologise for the inevitable inconvenience caused as a result of the actions of thoughtless idiots.

The incident has been reported to police. If anyone knows anything about who caused the damage please do speak to the Police or the Parish Clerk. 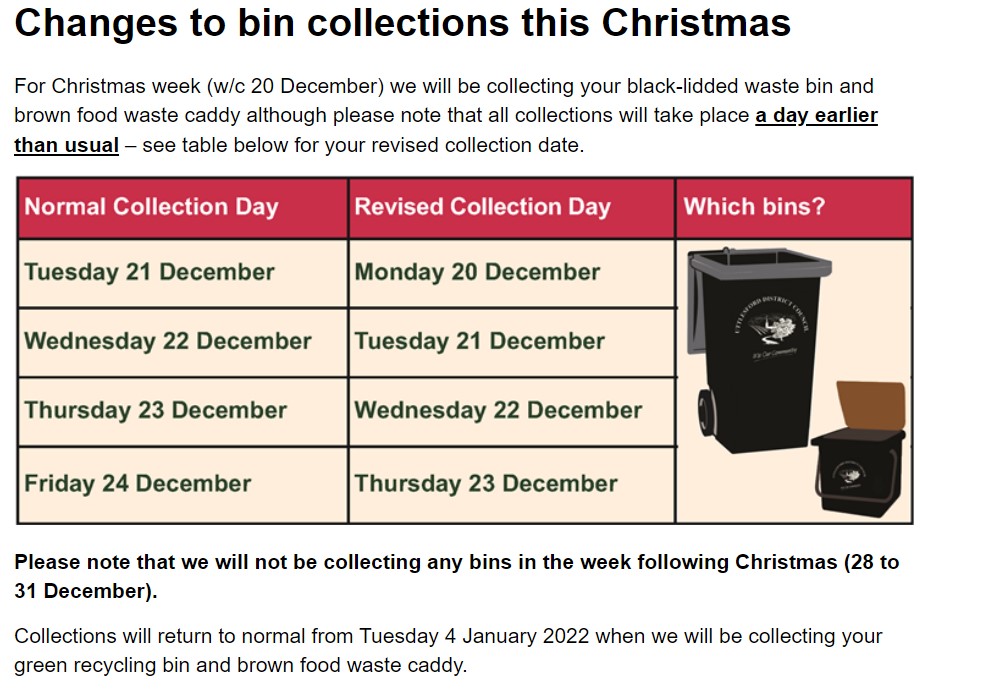 Following on from our decoration creation day we are delighted to say that the Felsted Xmas tree is now up in the centre of the village.

Please come along on Saturday 11th at 6:15 to see the tree lit, admire the beautiful decorations made by the community and to start the festive season off with friends and family. 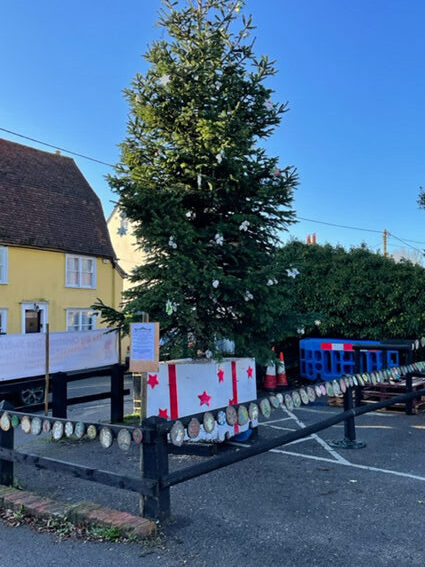 With our thanks to Roy Ramm and Richard Freeman for leading a tremendous effort yesterday and for the following report from Roy:

Yesterday we held our long-planned Decorations Day for the Parish Christmas tree at the Memorial Hall between 1pm and 5pm, though it took us from 5pm on Friday to decorate the hall and until 6:30pm on Saturday to clear up afterwards!

After so much planning we were naturally a bit apprehensive about what attendance might be like.  We shouldn’t have worried!  As we opened the doors at 1pm a steady flow of mums and dads and very excited children began and grew close to a flood.  Over the next few hours we had over 150 visitors. It was fantastic! 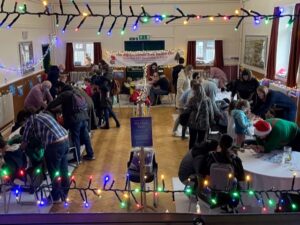 Every single one of about 80 slices of wood from a Felsted tree was decorated with snowmen, reindeer and Christmas trees.  Dozens of pine cones got glittered.  Children made dozens of lovely decorations to take home.  By the time the event closed we had pretty much run out of all materials.  Loads of children wrote letters to Santa and placed them in a superb Christmas post box made by Richard Freeman who is arranging for every one of them to receive a reply from the North Pole (which is surprisingly close to Cobblers Green).  Mums, dads and grandparents were treated to free teas, coffees and biscuits. 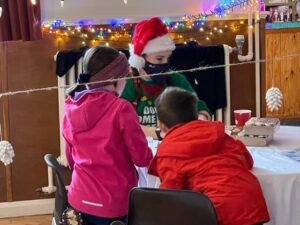 We received fantastically positive comments from the parents, a number of whom said it was the best ever thing Felsted PC had done.  In any event, as we also advertised the tree lighting on the 11th, we should now expect a really decent crowd .  All the children who came yesterday will be keen to see their painted tree slices, cones and stars around the Xmas tree. 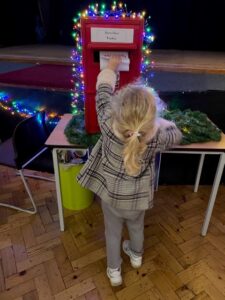 The clear up was a huge effort.  Thousands of lights and four Christmas trees had to be taken down.  Every splash of paint, fragment of glitter and glob of glue had to be cleaned off the tables and chairs. (Special thanks to Hope’s mum!) Discarded coffee cup had to be clear and the newly painted Memorial Hall returned as we found it in time for today’s events.

A lot of people put in a great deal of effort before, during and after the event, so I would just like to acknowledge on behalf of the PC that Richard and I were ably supported by:

Alice the crafter from Flitch Green on Christmas cards

Janet Johnston, Crafting Superwoman and so much more

Hope Alexander, Elf, snow glober extraordinaire, and so so much more

Janet Ramm, painting pine cones and adding glitter to herself

Further to our previous news item regarding a proposal for a solar farm development east of Willows Green,  Clearstone Energy Ltd has now produced a  Brochure further outlining their proposal.

With their apologies, our District Councillors have had to cancel their surgery due to be held at 6pm this Wednesday 6th October at the Memorial Hall.

The Royal British Legion  Remembrance Sunday wreath laying ceremony will take place at the Memorial in the centre of the village at 10.30am on Sunday 14th November, followed by a service in the Parish Church.

The latest Autumn edition of Felsted Focus is now being delivered throughout the Parish.

It can also be downloaded here

To protect the much-loved green spaces from development in Uttlesford, the District Council (UDC) is asking residents to help map environmentally important areas.

The ‘Call for Nature’ is part of the Uttlesford Local Plan project to devise new planning policy in the district. UDC wants to hear from residents, children and schools, nature groups and the many people who regularly walk our countryside.

Be environmentally aware & help UDC to map our rich and varied wildlife.

The council also hopes some of these sites will benefit from extra funding and expertise in future.